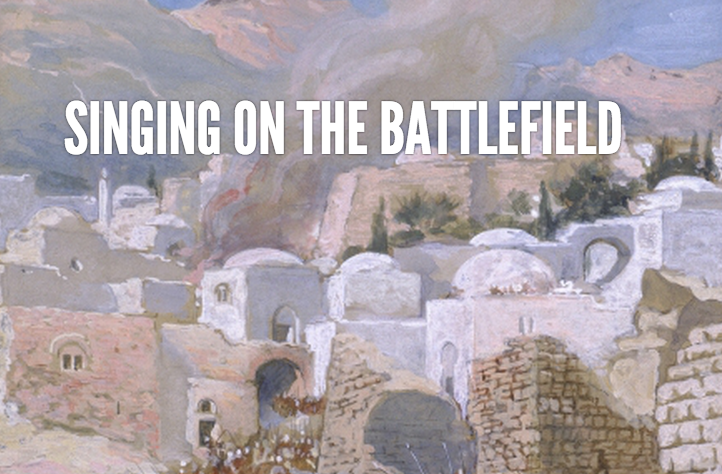 In biblical worship what is God’s role? What is ours?

We see the answer, of all places, in the middle of an ancient Jewish battle. Here is the story of how God worked through his people’s praises and received the glory.

In the years between Solomon and Daniel, the years of the split kingdom, God saved Judah from invasion (2 Chronicles 20). King Jehoshaphat prayed for rescue, and God answered by means of a prophet:

“You will not need to fight in this battle. Stand firm, hold your position, and see the salvation of the Lord on your behalf, O Judah and Jerusalem” (v. 17).

He sent out his army, not to fight, but to watch what God would do. And who did he place at the front line?

He placed the singers ahead of the soldiers and commanded them to shout out praises to God. They lifted their voices and sang, “Give thanks to the Lord, for his steadfast love endures forever” (v. 21).

When the people began to sing God’s Word, God caused the the Moabite, Ammonite, and Meunites invaders to turn on each other. There was a great slaughter, such that not a single man was left alive.

Implications for the church today?

How does Jehoshaphat’s worship compare with ours? Have we based our worship on God’s directions? And do we trust not in the power of our songs, but the power of the God to whom we sing?

We could say Jehoshaphat organized an amazing time of worship.  But really it was God who organized it.

God has organized our worship as well.

He has given us His Word to rule our lives and our corporate worship.

In light of what greater salvation we see in Jesus Christ, our worship today is as exciting as Jehoshaphat’s, for, whereas Jehoshaphat waited on Christ’s salvation, we have seen it and are seeing it daily.

Whereas Jehoshaphat’s national choir led a single battle, the battle we lead—the winning battle—plays out before us each week as we gather to lift up the name of the Jesus and to spread his fame to the nations.

God’s people give him the glory as he accomplishes his plan. Thus we sing.